Next year, 2013, Lissenhall will celebrate a very special event – the 50th anniversary of the opening of its community centre. But the building which has been the centre of social activities in the area for half a century has a far older history, which hopefully will be the subject of a future article in this Journal.

For generations, up to 1962, when the new school was opened in Lissenhall, it served as the local national school. As soon as the old classrooms were abandoned, a group of local past pupils formed a committee to preserve the old building, and ensure the continuation of its links with the past and the threading together of the several generations of pupils who went to school in Lissenhall. 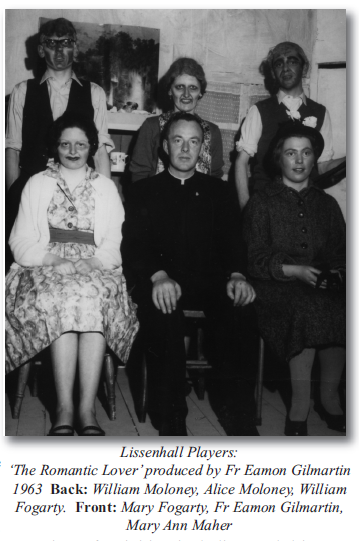 In addition to preserving as much as possible of the old character and appearance of the building, it was decided to convert it into a community centre. The abundance of voluntary labour, which was immediately forthcoming, showed the extent of the commitment and enthusiasm of the local people for the project Like most rural community centres, it immediately became the venue for a variety of activities, including card drives, socials and plays, and quickly expanded to include Irish dancing classes for both adults and children, ladies’ crafts, badminton, dramatics, pool, progressive 45 drives every week, socials, cabarets of Irish music, song and dance and variety concerts.

The building continues to be the main meeting point in the locality even if the programme and atmosphere have changed a little. Drama has been particularly strong over the years. Since their establishment in 1963, when they staged their first One Act comedy ‘The Romantic Lover’ produced by the late Fr Eamon Gilmartin CC, and their first Three Act play ‘Professor Tim’ produced by the late Dick Tobin, the Lissenhall Players have been rolling out productions to a very a high standard for five decades.

One of the most memorable events held in the Community Centre was what is believed to have been the first ever National School past pupil’s re-union in the country. The venture, on March 5, 1977, was an outstanding success. Over 200 past pupils from many decades and domiciled in many different places at home and abroad met in the old school. Many had not met since they had shared desks over 50 years before. The initials they had carved on the desks and benches had long since been obliterated by discerning woodworm. Many recollections, funny and not so funny, were exchanged. Fr Harry Sheehy stole the show here. The attention with which the attendance listened to the messages and apologies received from many past pupils who for various reasons could not be present, was striking. There were plenty of songs, jokes and dancing and, of course, a beautiful meal was served. 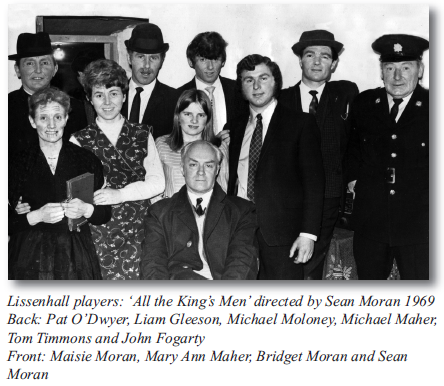 There was some nervous apprehension among the h a r d w o r k i n g committee as they suddenly realised that toilets facilities had not kept pace with modern technology and still depended very much on weather conditions.

But everything was resolved with plenty of good humour. One of the most heartwarming experiences for many that night was meeting their former teacher, Mr Pat Cleary. It was, no doubt, an equally pleasant and touching experience for Pat. It was his first time in the school since he had left 40 years earlier.

A history of Lissenhall Community Centre and particularly the Lissenhall Players is currently being researched for the golden jubilee. Any assistance such as photos, recordings, special memories, etc, would be very much appreciated.

Posted in Mining the Past and tagged Lissenhall, Lissenhall players